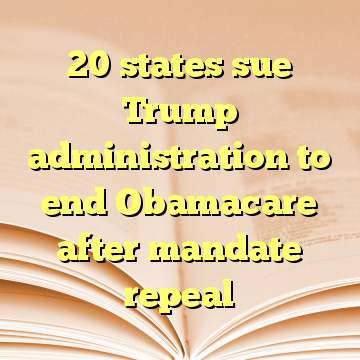 (Worthy News) – Twenty states are suing the Trump administration over the individual mandate in Obamacare that obligates people have health insurance or pay a fine, seeking an end to the entire law.

In the lawsuit filed Monday, states said Congress’s decision to repeal the tax penalty as part of the Republican tax bill signed into law by President Trump, invalidates the mandate and all of Obamacare. The penalty still applies this year, but will go to zero beginning in 2019.

The complaint was filed in the U.S. District Court in the Northern District of Texas. [ Source: Washington Examiner (Read More…) ]