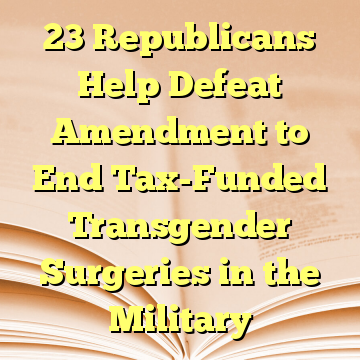 (Worthy News) – On Thursday, 23 House Republicans joined 190 Democrats to vote down the Hartzler Amendment to the National Defense Authorization Act (NDAA), which would have stopped the Pentagon from using taxpayer dollars to pay for gender reassignment surgeries.

The amendment, proposed by Rep. Vicky Hartzler (R-Mo.), would have saved an estimated $2.4 to $8.4 million dollars annually, according to the RAND corporation. Money would still be permitted to go towards any mental health services sought out by transgendered service members.

“I am disappointed by the outcome of today’s vote,” Rep. Hartzler told TIME Magazine after her amendment failed to pass, “but the issue still remains and steps must be taken to address this misuse of our precious defense dollars.” [ Source: CNS News (Read More…) ]