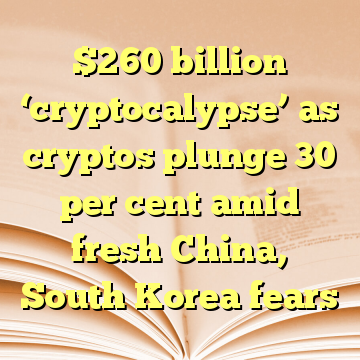 (Worthy News) – The cryptocurrency market has lost $US206 billion overnight in what traders are describing as a “cryptocalypse”, with bitcoin heading back towards its $US10,000 milestone first reached last November.

But it was smaller currencies including ripple, ethereum and bitcoin cash that were the hardest hit in the latest sell-off, which was sparked by fresh fears of a crackdown on virtual currencies by governments in South Korea and China.

At the time of writing, ripple was down nearly 50 per cent on the previous day, ethereum had lost nearly 34 per cent of its value, bitcoin cash was down nearly 37 per cent and bitcoin was down 27 per cent to just under $US10,200. [ Source: News (Read More…) ]