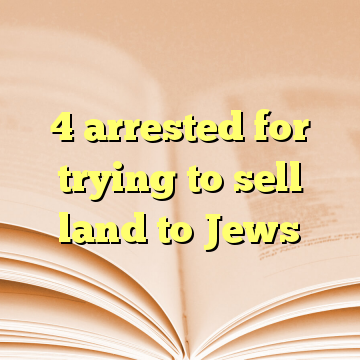 (Worthy News) – Four people have been arrested for the capital offense of selling Palestinian land to Jews, even though the deals apparently were halted before completion, according to authorities.

The Ma’an news agency reported that the Palestinian Authority’s General Intelligence Service, after a lengthy investigation, arrested four Arab real-estate brokers thought to have tried to “divert land to the occupation.”

Breaking Israel News commented the laws relating to such transactions are “the most racist laws on the books anywhere on the planet.” [ Source: WND (Read More…) ]