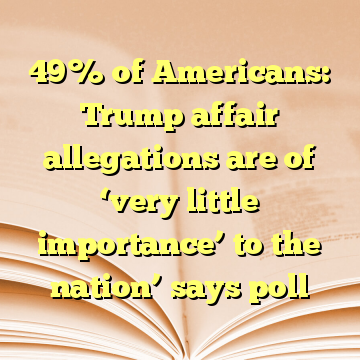 (Worthy News) – Eight-out-of-10 Americans have heard the news of an adult film actress who says she had an alleged sexual encounter with President Trump in 2006 — a percentage which is shared almost equally between Republicans, independents and Democrats according to a new Economist/YouGov poll released Tuesday.

If they had known this news during the 2016 election, would it have influenced their vote? Maybe not. The poll also found that 5 percent of Americans overall said that if they had known of the allegations before going to the polls, they “would have voted differently.” Four percent of Republicans, 2 percent of independents and 11 percent of Democrats agree with that.

49 percent overall say these allegations are of “very little importance to the nation”; 68 percent of Republicans, 57 percent of independents and 24 percent of Democrats agree. [ Source: Washington Times (Read More…) ]

The post 49% of Americans: Trump affair allegations are of ‘very little importance’ to the nation’ says poll appeared first on Worthy Christian News.