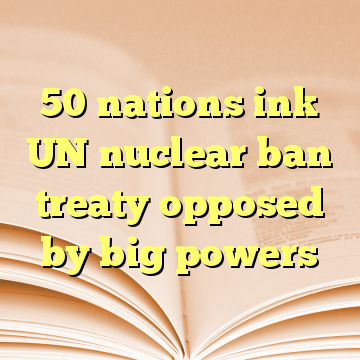 (Worthy News) – Fifty countries on Wednesday signed a treaty to ban nuclear weapons, a pact that the world’s nuclear powers spurned but supporters hailed as a historic agreement nonetheless.

“You are the states that are showing moral leadership in a world that desperately needs such moral leadership today,” Beatrice Fihn, executive director of the International Campaign to Abolish Nuclear Weapons, said as a signing ceremony began.

Before the day was out, 50 states as different as Indonesia and Ireland had put their names to the treaty; others can sign later if they like. Guyana, Thailand and the Vatican also have already ratified the treaty, which needs 50 ratifications to take effect among the nations that back it. [ Source (Read More…) ]