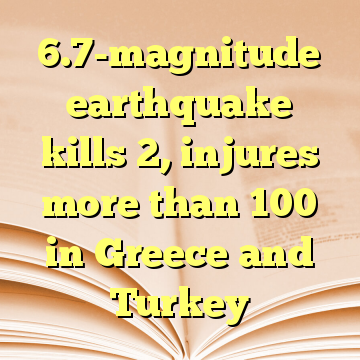 (Worthy News) – A 6.7-magnitude earthquake hit popular tourist areas near several Greek islands and Turkey’s Aegean coast, killing at least two people and injuring more than 100 others, according to reports.

Kos, a Greek island popular with tourists, appears to have been the area hardest-hit by the earthquake. Both of the confirmed deaths happened in Kos and at least 120 people have been reported injured, according to the Guardian.

In Turkey, about six miles south of the city of Bodrum, reports indicate at least 70 people have been injured. Turkish officials said that more than 20 aftershocks have. [ Source:UPI (Read More…) ]