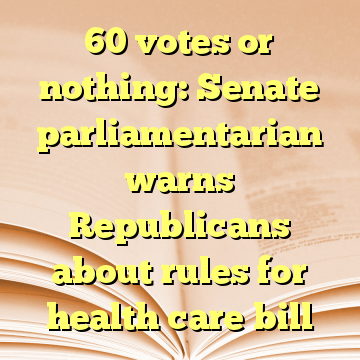 (Worthy News) – Key parts of the Republican health care bill, including defunding Planned Parenthood and barring the use of tax credits for abortion coverage, are not eligible for the fast-track process Republicans are using to prevent a Democratic filibuster, says the Senate’s referee, throwing yet another roadblock in front of President Trump’s attempt to repeal and replace Obamacare this week.

Already, Republican leaders are struggling to gather enough support from the party’s rank and file for their replacement bill or a straightforward repeal of the 2010 law, even though they are leveraging “budget reconciliation” rules to carve Democrats out of the process.

In new guidance, the Senate parliamentarian made their task tougher by saying key parts of the plan should require 60 votes to pass, according to Senate Democrats on the Budget Committee. [ Source:Washington Times (Read More…) ]