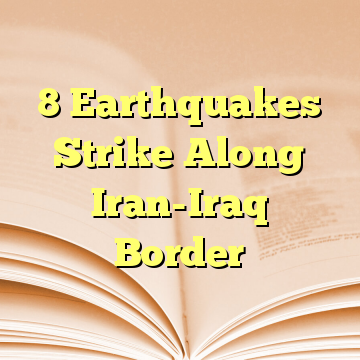 (Worthy News) – A series of eight earthquakes hit the Iran-Iraq border area and rattled Baghdad on Thursday, apparent aftershocks of a temblor that struck the mountainous region in November and killed over 530 people. Four people suffered minor injuries in Iran, state television reported.

The U.S. Geological Survey said seven of the quakes struck near the Iraqi city of Mandali, 120 kilometers (75 miles) northeast of the Iraqi capital. Mandali is right on the border between the two nations. The eighth hit near Mehran in western Iran, about 90 kilometers (55 miles) southeast of Mandali along the sparsely populated Zagros Mountains that divide Iran and Iraq.

All the earthquakes struck within an hour of each other, beginning at 0659 GMT. Six had a preliminary magnitude of at least 5, while two registered at magnitude 4. Scientists consider earthquakes of magnitude 5 as moderate.[ Source: Time (Read More…) ]