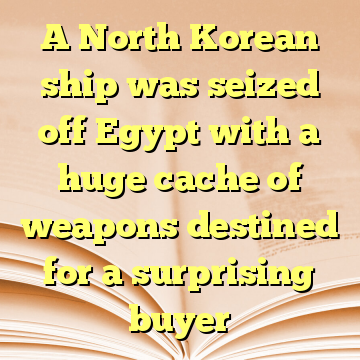 (Worthy News) – Last August, a secret message was passed from Washington to Cairo warning about a mysterious vessel steaming toward the Suez Canal. The bulk freighter named Jie Shun was flying Cambodian colors but had sailed from North Korea, the warning said, with a North Korean crew and an unknown cargo shrouded by heavy tarps.

Armed with this tip, customs agents were waiting when the ship entered Egyptian waters. They swarmed the vessel and discovered, concealed under bins of iron ore, a cache of more than 30,000 rocket-propelled grenades. It was, as a United Nations report later concluded, the “largest seizure of ammunition in the history of sanctions against the Democratic People’s Republic of Korea.”

But who were the rockets for? The Jie Shun’s final secret would take months to resolve and would yield perhaps the biggest surprise of all: The buyers were the Egyptians themselves.

A U.N. investigation uncovered a complex arrangement in which Egyptian business executives ordered millions of dollars worth of North Korean rockets for the country’s military while also taking pains to keep the transaction hidden, according to U.S. officials and Western diplomats familiar with the findings. The incident, many details of which were never publicly revealed, prompted the latest in a series of intense, if private, U.S. complaints over Egyptian efforts to obtain banned military hardware from Pyongyang, the officials said. [ Source: Washington Post (Read More…) ]