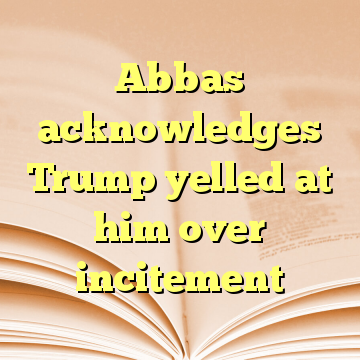 (Worthy News) – Following stringent Palestinian denials that US President Donald Trump shouted at Palestinian Authority President Mahmoud Abbas about Palestinian incitement against Israel during their meeting last week, Abbas conceded — in Arabic — that the story was true, according to a report by the London-based Qatari news site al-Araby al-Jadid.

Channel 2 News reported earlier this week that during their talks in Bethlehem last week, Trump yelled at Abbas and accused him of direct involvement in incitement against Israel.

“You tricked me in DC! You talked there about your commitment to peace, but the Israelis showed me your involvement in incitement,” Trump is said to have shouted at a shocked Abbas. [ Source ]