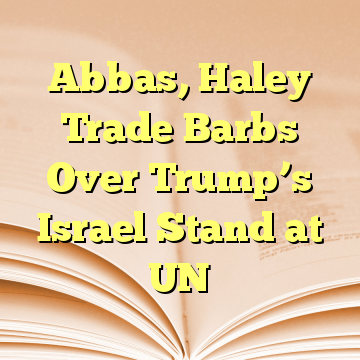 (Worthy News) – Palestinian President Mahmoud Abbas called President Donald Trump’s decision to move the U.S. embassy in Israel to Jerusalem a “dangerous” development in a speech before the United Nations, then walked out before U.S. envoy Nikki Haley retorted that “we will not chase after you.”

Abbas, who renewed his call for an international conference this year to seek a Mideast accord, has vowed not to meet with U.S. officials until the Jerusalem embassy decision is reversed.

“To solve the Palestine question, it is essential to establish a multilateral international mechanism emanating from an international conference,” Abbas said, adding he hoped “to find a way out of the stalemate and crisis we are in.”

However, he finished his address with a warning — which others may read as a threat — of violence unless the U.S. restores funds that were cut to the UN Relief and Works Agency, which administers to millions of Palestinian refugees. [ Source: Bloomberg (Read More…) ]