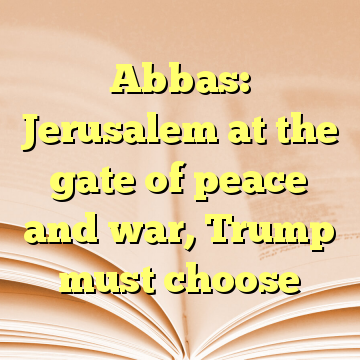 (Worthy News) – Palestinian Authority President Mahmoud Abbas on Wednesday used fiery rhetoric to slam US President Donald Trump’s changes to American policy on Jerusalem, and an official confirmed that the Palestinians will not be meeting with Vice President Mike Pence when he visit the region next week.

“[ Jerusalem] is the gate of peace and war, and Trump must choose,” Abbas said at a conference at Al-Azhar University in Cairo, referring to the American president’s decisions on Jerusalem as a “sin.”

At the White House on December 6, Trump recognized Jerusalem as Israel’s capital and initiated the relocation the US Embassy in Tel Aviv to the holy city, breaking with decades of American policy. [ Source: Jerusalem Post (Read More…) ]