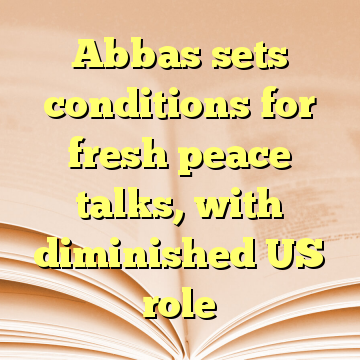 (Worthy News) – The Palestinians are prepared to return to the negotiating table with Israel, but only on the basis of an international multilateral mechanism, the Arab Peace Initiative and international resolutions pertaining to the Israeli-Arab conflict, Palestinian Authority President Mahmoud Abbas said on Monday.

Abbas’s comments, which appeared to fall in line with the PA demand that the US not play a leading role in brokering talks, were made during a phone conversation with British Foreign Secretary Boris Johnson.

Palestinian officials, angry over what they see as US bias in Israel’s favor, have refused to work with Washington on a peace initiative and say the US can only play a role as part of a larger multilateral effort, a position Israel, the US and others oppose. [ Source: Times of Israel (Read More…) ]