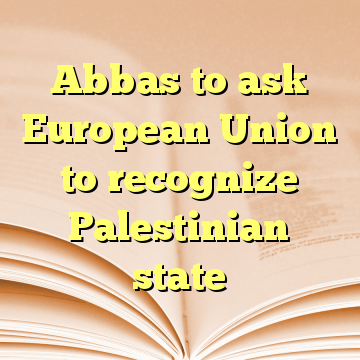 (Worthy News) – Palestinian Authority President Mahmoud Abbas will ask the European Union to officially recognize the state of Palestine when he meets foreign ministers from the bloc on Monday, a senior official said Sunday.

Abbas is scheduled to meet with EU diplomatic chief Federica Mogherini and the foreign ministers of the Union’s 28 countries on the sidelines of their monthly meeting. Israeli Prime Minister Benjamin Netanyahu held a similar meeting last month.

The issue of recognition of a Palestinian state is expected to be at the top of the agenda for Monday’s talks. [ Source: Times of Israel (Read More…) ]