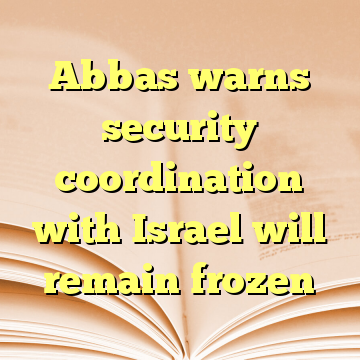 (Worthy News) – Palestinian Authority President Mahmoud Abbas said on Tuesday he will maintain a freeze on security coordination with Israel, despite the removal of metal detectors and security cameras from the entrances to the Temple Mount.

“Unless all measures go back to what they were before July 14, there will not be any changes,” Abbas said, referring to the date on which two Israeli police officers were shot dead just outside the compound. The terrorists, three Israeli Arabs, used guns that had been smuggled into the holy site by an accomplice.

“All the new Israeli measures on the ground from that date to the present are supposed to disappear,” he said. “Then things will return to normal in Jerusalem and we will continue our work after that in relation to bilateral relations between us and them.” [ Source (Read More…) ]