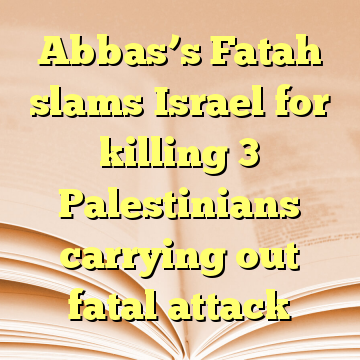 In a statement, Fatah called the deaths of the three assailants, who attacked at two locations near Jerusalem’s Old City, a “war crime.”

Hamas said all three of the assailants were members of Palestinian terrorist organizations.

Israeli security forces were out in force Saturday in the West Bank village of Deir Abu-Mashal, near Ramallah, home of the three terrorists who carried out the stabbing and shooting attacks near Jerusalem’s Old City on Friday.

Officials said army troops temporarily sealed off the village, then raided the men’s homes, where they searched for weaponry, confiscated various documents and questioned family members over the attack.

Soldiers also mapped the homes of the three men in preparation for the likely demolition of the houses, a common Israeli response to attacks. [ Source ]

Noting that the three assailants who carried out Friday night’s coordinated attacks that took the life of St.-Sgt.- Maj. Hadas Malka, 23, came unlawfully from the village of Deir Abu Mash’al near Ramallah, police enforced a massive crackdown.

“Police security measures are continuing at the Damascus Gate and around the walls of the Old City, with special patrol units and SWAT teams that are arresting suspects and removing individuals from the area to keep it safe,” said police spokesman Micky Rosenfeld on Sunday. [ Source ]