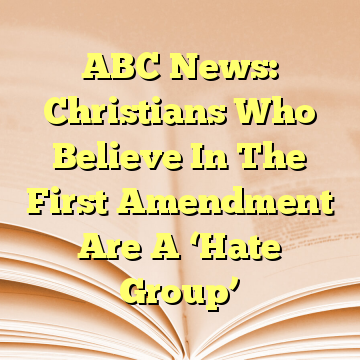 (Worthy News) – ABC News’ Pete Madden and Erin Galloway smeared Christians who believe the Bill of Rights secures religious liberty as a “hate group,” in an article this week headlined, “Jeff Sessions addresses ‘anti-LGBT hate group,’ but DOJ won’t release his remarks.” The lede of the story made it clear this was not just the work of a rogue headline writer but the failure of the reporters themselves:

Attorney General Jeff Sessions delivered a speech to an alleged hate group at an event closed to reporters on Tuesday night, but the Department of Justice is refusing to reveal what he said.

First, a note that you can — and should — read the prepared remarks of the Attorney General here at The Federalist.

Who is this “hate group”? Alliance Defending Freedom is not a hate group at all, but a civil liberties organization that battles for religious liberty. And they’re not a fringe group either. They just weeks ago won their most recent Supreme Court victory — Trinity Lutheran v. Comer — 7-2. It was their fifth Supreme Court victory in seven years, during which time they’ve had no losses at the high court.

And the group is ranked among the top law firms in the country for its successes at the Supreme Court. [ Source: Federalist (Read more…) ]