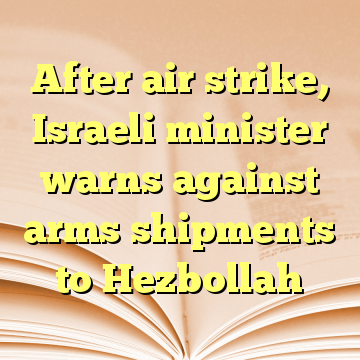 (Worthy News) – A senior Israeli minister on Thursday declined to comment on reports that Israeli aircraft had struck a target in Syria the night before but repeated a threat to hit arms shipments to Lebanese Hezbollah guerrillas.

The air strike targeted a factory south of the Syrian city of Homs on Wednesday night and the Syrian army responded by firing a surface-to-air missile at the aircraft, a commander in a military alliance fighting in support of Damascus said.

An Israeli military spokeswoman declined to comment, but Israel’s Channel 10 said the aircraft were not hit and returned safely to base.

“I can‘t, of course, relate to reports about the Israel Defence Forces’ attack in Syria, but regardless, Israel’s position is clear: Smuggling arms to Hezbollah is a red line in our eyes,” Intelligence Minister Israel Katz told Army Radio. [ Source: Reuters (Read More…) ]