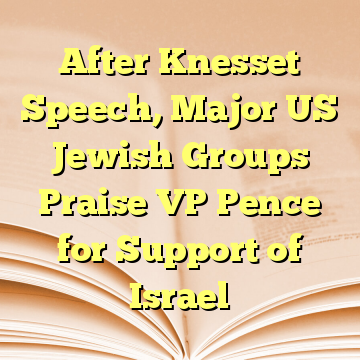 (Worthy News) – US Vice President Mike Pence’s speech at the Israeli Knesset on Monday was warmly praised by a number of major American-Jewish groups.

“President Donald Trump and Vice President Mike Pence have proven time and again since entering office that the US administration today is a true friend of the State of Israel, dedicated to the well-being and security of the Jewish people, to the indisputable nature of Jerusalem as Israel’s historic capital, and to supporting a two-state solution to the Israeli-Palestinian conflict if agreed upon by both sides,” World Jewish Congress President Ronald S. Lauder said in a statement.