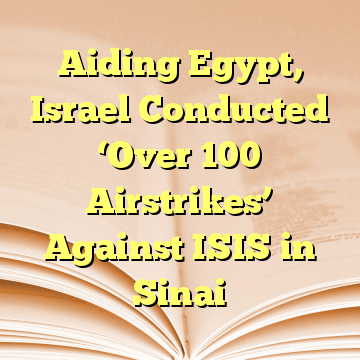 (Worthy News) – Egypt has permitted Israel to conduct over a hundred aerial raids on the Islamic State group affiliate in Sinai, the restive desert peninsula that shares a border with Israel, the New York Times claimed Saturday.

The report details what it calls a “covert war” in Sinai in which “unmarked Israeli drones, helicopters and jets” have been allowed to carry out over 100 raids inside Egyptian territory for over two years, at times more than once a week.

According to the report, American officials credit the wave of Israeli airstrikes — which the Times said began at around the time that the Sinai Province branch of Islamic State brought down a Russian charter plane over the peninsula, resulting in the deaths of the 224 people it carried — “with killing a long roster of militant leaders” in Sinai. [ Source: Ha’aretz (Read More…) ]