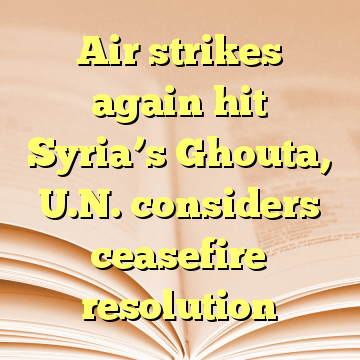 (Worthy News) – Warplanes pounded the last rebel enclave near Syria’s capital for a fifth day running on Thursday as the U.N. Security Council considered demanding a 30-day ceasefire across the country to allow emergency aid deliveries and medical evacuations.

The U.N. envoy for Syria, Staffan de Mistura, pleaded for a truce to halt one of the fiercest air assaults of the seven-year civil war and prevent a “massacre” in the besieged eastern Ghouta region on the outskirts of Damascus.

At least 416 people have been killed in eastern Ghouta since Sunday night, according to the Syrian Observatory for Human Rights war monitor, with more than 2,100 wounded from the assault by Syria’s military and its allies. [ Source: Reuters (Read More…) ]