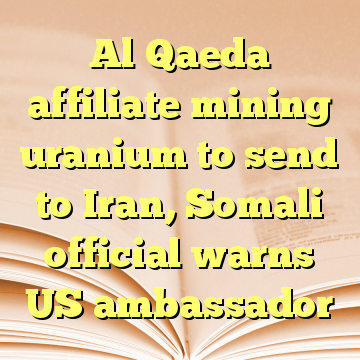 (Worthy News) – An Al Qaeda affiliate has seized control of uranium mines in Africa with the intent of supplying the material to Iran, according to a diplomatic letter from a top Somali official appealing to the U.S. for “immediate military assistance.”

The letter, reviewed by Fox News, was addressed to U.S. Ambassador to Somalia Stephen Schwartz. Somalia’s Ambassador to the U.S. Ahmed Awad confirmed to Fox News on Thursday that the letter “has indeed been issued” by Minister of Foreign Affairs Yusuf Garaad Omar, whose signature is on the document.

The Aug. 11-dated letter delivered an urgent warning to the U.S. that the al-Shabaab terror network has linked up with the regional ISIS faction and is “capturing territory” in the central part of the country. [ Source (Read More…) ]