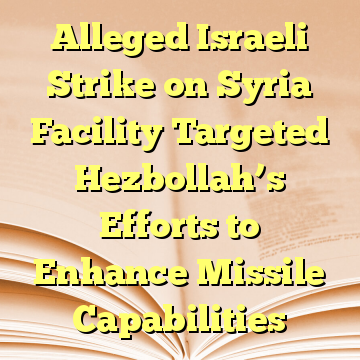 (Worthy News) – The village of Jamraya is located several kilometers northeast of Damascus, near a large military and research complex. The entrance to the well-guarded facility is likely permitted exclusively to people who have been checked and approved by Syria’s internal security apparatuses.

In this facility, which officially belongs to the Scientific Studies and Research Center (SSRC), the Assad regime is developing and producing—according to foreign reports—chemical weapons and different types of missiles.

Considering the fact that the site has been reportedly attacked at least three times in the past two years with precision-guided weapons—allegedly by Israel, according to the Syrian regime—there are three possible reasons the facility was bombed once again Tuesday night. [ Source: Ynet News (Read More…) ]