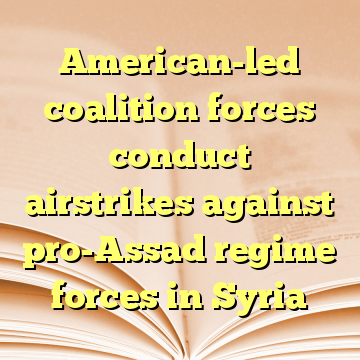 (Worthy News) – The American-led coalition in Syria conducted an airstrike on pro-regime forces after an “unprovoked” attack on the headquarters of the Syrian Democratic Forces Wednesday.

Operation Inherent Resolve stated the attack from the pro-regime groups on the SDF was unprovoked, and in response, the coalition, led by the U.S., conducted strikes against the pro-Assad attackers, operation officials stated Wednesday.

“In defense of coalition and partner forces, the coalition conducted strikes against attacking forces to repel the act of aggression against partners engaged in the Global Coalition’s defeat-Daesh mission,” the statement read. [ Source: Washington Examiner (Read More…) ]