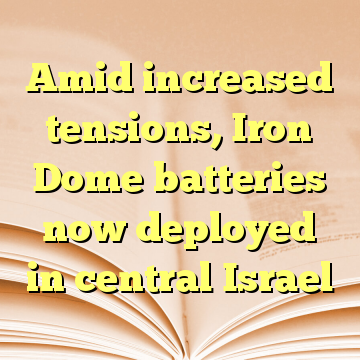 (Worthy News) – Amid increased tension on both its northern and southern borders, Israel has deployed Iron Dome batteries in the Gush Dan region in central Israel, it was cleared for publication on Tuesday.

The deployment of the batteries in an area that encompasses Tel Aviv and other central Israeli cities comes amid threats from Palestinian Islamic Jihad (PIJ) after Israel destroyed one of its cross-border attack tunnels two weeks ago, killing 12 terrorists who were inside.

While the army has not called up reservists, the IDF also has upped its readiness along the Gaza border, forbidding farmers and other civilians from approaching close to the Hamas-controlled enclave, and closing down three tourists site along the Strip. [ Source: Jerusalem Post (Read More…) ]