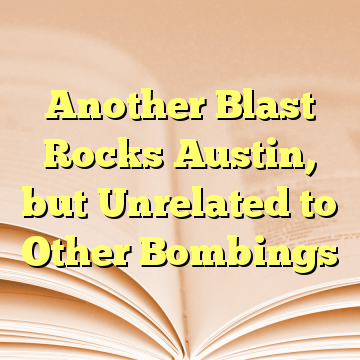 (Worthy News) – Emergency teams rushed Tuesday night to another reported explosion in Austin — this one at a Goodwill store — but police and federal authorities said the blast wasn’t related to recent bombings that have killed and injured people and caused panic across Texas’ capital for weeks.

Police and emergency response teams said an “incendiary device” exploded, injuring a man in his 30s. Nearby stores, shopping centers and restaurants were evacuated. But police and the U.S. Bureau of Alcohol, Tobacco, Firearms and Explosives said a short time later that it was unrelated to the previous blasts.

Gary Davis, president and CEO of Goodwill Texas, stood outside a police barrier huddling with other Goodwill employees. He said the device was contained in a bag and detonated when a worker moved it. [ Source: CBN News (Read More…) ]

The post Another Blast Rocks Austin, but Unrelated to Other Bombings appeared first on Worthy Christian News.