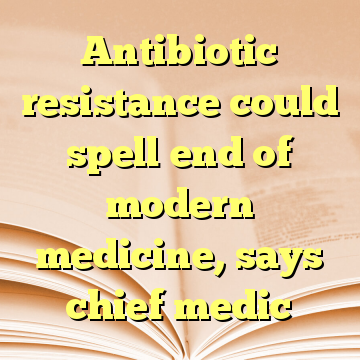 (Worthy News) – England’s chief medical officer has repeated her warning of a “post-antibiotic apocalypse” as she urged world leaders to address the growing threat of antibiotic resistance.

Prof Dame Sally Davies said that if antibiotics lose their effectiveness it would spell “the end of modern medicine”. Without the drugs used to fight infections, common medical interventions such as caesarean sections, cancer treatments and hip replacements would become incredibly risky and transplant medicine would be a thing of the past, she said.

“We really are facing – if we don’t take action now – a dreadful post-antibiotic apocalypse. I don’t want to say to my children that I didn’t do my best to protect them and their children,” Davies said.

Health experts have previously said resistance to antimicrobial drugs could cause a bigger threat to mankind than cancer. In recent years, the UK has led a drive to raise global awareness of the threat posed to modern medicine by antimicrobial resistance (AMR). [ Source: Guardian (Read More…) ]