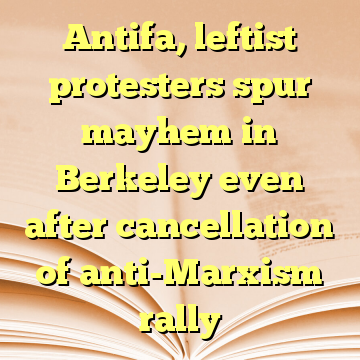 (Worthy News) – Two right-leaning rallies in the Bay Area were canceled over the weekend by organizers over fears of violence, but that didn’t stop leftist radicals from creating chaos.

Berkeley police reportedly made 14 arrests Sunday as thousands of counter-protesters flooded Civic Center Park in Berkeley, even though the previously scheduled “No to Marxism in America” rally had been canceled the day before.

Hundreds of black-clad antifa activists jumped police barricades and tracked down the small number of Trump supporters who showed up anyway, beating up at least one man and hitting another with sticks, as shown on video from KCRA-TV in Sacramento. [ Source (Read More…) ]

"Take his camera, take his phone," they are shouting at a journalist. #berkeley http://pic.twitter.com/hvsQ5eXalE