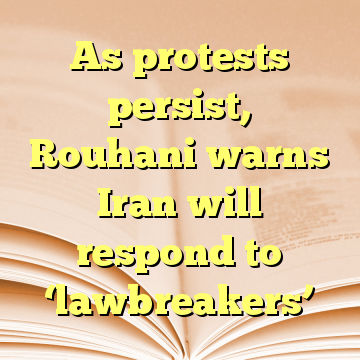 (Worthy News) – Iranian President Hassan Rouhani on Monday said his country would respond to “rioters and lawbreakers,” a day after attempting to strike a conciliatory tone with protesters demonstrating against the regime across the country.

The comments, which also pointed a finger at the US, Israel and Saudi Arabia for fueling the unrest, came as Iran’s state broadcaster said 12 people had been killed in four days of unrest.

Six people were killed in the western town of Tuyserkan after shots were fired, state television reported, while a local lawmaker said two people had been shot dead in the southwestern town of Izeh. [ Source: Times of Israel (Read More…) ]