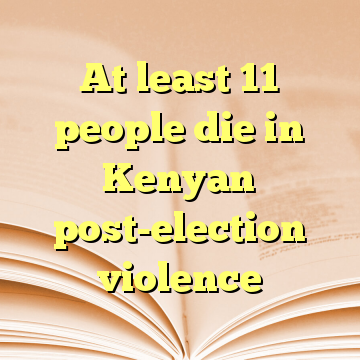 (Worthy News) – Tensions remained high in Kenya yesterday after 11 people died in violent protests and the opposition stood by its demand that the re-election of President Uhuru Kenyatta be overturned.

Stone-throwing supporters of defeated veteran rival Raila Odinga squared off over the weekend with security forces in opposition strongholds in the country’s west and the slums of the capital Nairobi.

A senior police official said eight bodies from Nairobi’s slums had arrived at the city morgue, and an Agence France-Presse photographer saw the body of a young girl whose family said she had been shot in the back while watching protests from a balcony. [ Source (Read More…) ]