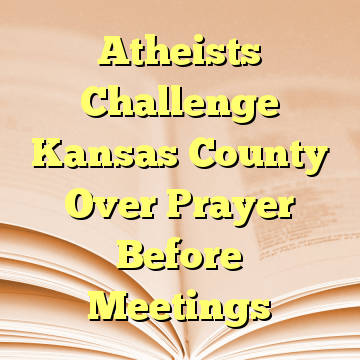 (Worthy News) – Local government officials in the second most populous county in Kansas are grappling with a challenge by atheists to a decades-old practice of opening meetings with prayer, prompting a Sedgwick County Commissioner to say during a public meeting Tuesday that if they don’t believe in God, he doesn’t care if they “go to hell.”

Sedgwick County commissioners planned to meet with their attorney behind closed doors in the wake of a letter from the Freedom From Religion Foundation, a group based in Madison, Wisconsin, that advocates for the separation of church and state.

Sedgwick County spokeswoman Kate Flavin said Wednesday that no decision has been made and the group’s request is still under review, adding that the county believes its existing policy strikes the “proper constitutional balance.” [ Source: CBN News (Read More…) ]