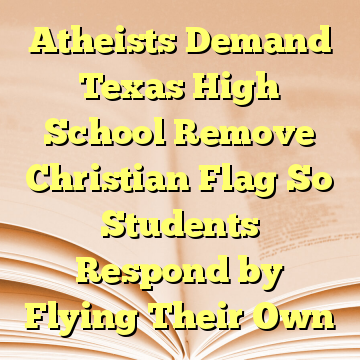 (Worthy News) – Students at an East Texas high school have responded to an atheist group’s demands that the school remove a Christian flag by bringing their own Christian flags to fly on school grounds.

Many in the community of Larue, Texas, are speaking out against the nation’s leading secularist legal organization, Freedom From Religion Foundation, after it sent a letter to the Superintendent James Young of LaPoynor Independent School District on Oct. 11 to demand that LaPoynor High School stop flying a Christian flag alongside the United States and Texas flags in front of the school.

FFRF attorney Sam Grover wrote in the letter that FFRF was contacted by a former student following the school’s participation in the annual “See You at the Pole” event on Sept. 27. [ Source: Christian Post (Read More…) ]