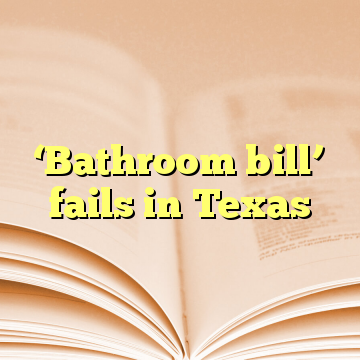 (Worthy News) – Efforts to pass a so-called “bathroom bill” in Texas failed this week when the legislature abruptly ended a 30-day special session with no vote on the measure.

Despite support among voters and legislators, the bill, titled the “Texas Privacy Act,” garnered a pack of big business opponents, including organizations like the NFL, Apple, Amazon, Exxon Mobile, and Hilton, who threatened retribution against the state if the bill passed.

The proposed legislation would have required transgender individuals to use the public restroom corresponding to their biological sex in schools and state buildings. North Carolina passed a similar law in 2016 but then partially repealed the measure due to public backlash.

Supporters argued the measure was about ensuring the safety of girls and women in showers, locker rooms, and restrooms. [ Source (Read More…) ]