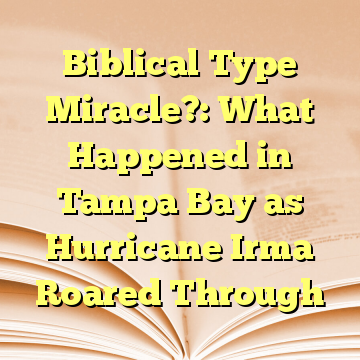 (Worthy News) – Hurricane Irma caused massive flooding as it ripped its way through Florida and the Caribbean last week — but not for everyone. Tampa Bay residents experienced a bizzare phenomenon that some believe comes straight out of the Bible.

Instead of pummeling Tampa Bay with massive waves, Hurricane Irma’s powerful winds sucked the water away from the shoreline.

“People were stunned! Manatees got beached because the water receded so fast, and people had to walk out into the bay, put them onto tarps and pull them further out to water,” she said. [ Source (Read More…) ]