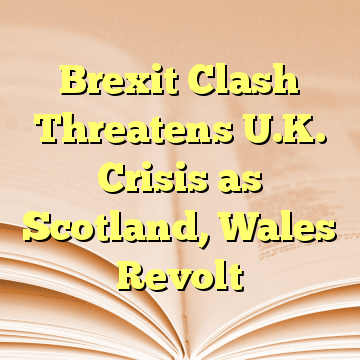 (Worthy News) – Theresa May unveiled a landmark draft law to take Britain out of the European Union, sparking a furious backlash from Scotland and Wales and fueling political opposition that could derail her plans for Brexit.

The 66-page bill will transfer EU laws onto the British statute book for when the U.K. leaves the bloc in March 2019. But the leaders of the semi-autonomous Scottish and Welsh governments attacked May’s plan for failing to give them sufficient powers and threatened to block the bill in votes in the national legislatures in Edinburgh and Cardiff.

The bill takes powers back from the EU in Brussels and gives them to the central U.K. government in London, instead of devolving decision-making to Wales and Scotland, Jones and Sturgeon said. “On that basis, the Scottish and Welsh governments cannot recommend that legislative consent is given to the bill as it currently stands.” [ Source: Bloomberg ]