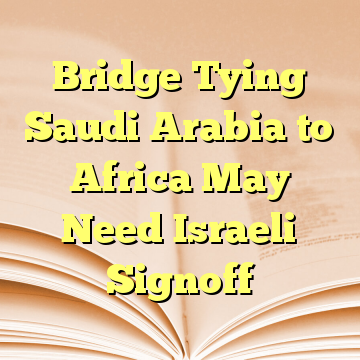 (Worthy News) – Connecting Egypt to a new $500 billion Saudi city via a bridge across the Red Sea will require cooperation from Israel, analysts say. Could it one day help integrate the Jewish state with its Arab neighbors?

Israel’s 1979 peace treaty with Egypt guarantees it access to the Red Sea’s Straits of Tiran, which the planned bridge and causeway would cross. That makes Israel’s involvement in the project crucial, says Yoram Meital, chairman of the Chaim Herzog Center for Middle East Studies & Diplomacy at Israel’s Ben-Gurion University of the Negev. Egypt’s closing of the straits to Israeli shipping in 1967 was one of the central actions that led to that year’s Mideast War.

Israeli Prime Minister Benjamin Netanyahu’s office did not respond to a request for comment on the project, whose plans were announced Tuesday by Saudi Crown Prince Mohammed bin Salman at an international business conference in Riyadh. [ Source (Read More…) ]