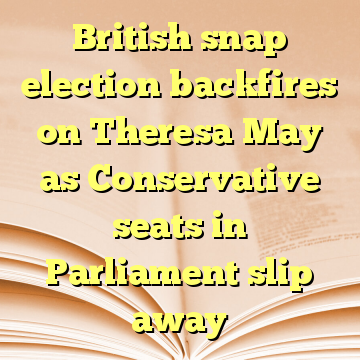 (Worthy News) – In what would be a shocking repudiation of Prime Minister Theresa May, British exit polls Thursday suggested the ruling Conservatives were on course to lose their majority in Parliament in an election Mrs. May called to cement her power and boost her bargaining leverage ahead of tough negotiations over exiting the European Union.

While the final results were uncertain late Thursday, it seemed clear that Mrs. May’s bid to build up her slender majority had backfired badly and that the Labor Party and its beleaguered leader, Jeremy Corbyn, had far surpassed the expectations of just two months ago.

While the Conservatives were on course to remain the single largest party in the House of Commons, the exit polls pointed to a “hung Parliament” that would require Mrs. May to cobble together a coalition to stay in power or even clear the way for Mr. Corbyn to try to put together a governing coalition of his own. [ Source ]