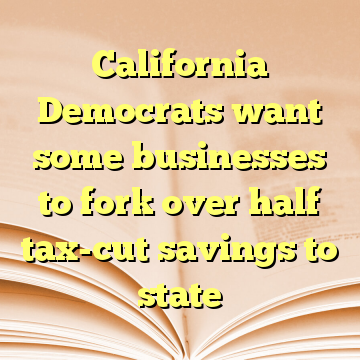 (Worthy News) – Calling the Trump administration’s tax reform plan a “middle-class tax increase,” two California lawmakers introduced a bill that would force large companies to fork over half of their expected savings to the state.

Assemblymen Kevin McCarty and Phil Ting, both Democrats, introduced Assembly Constitutional Amendment 22, which calls for a 10 percent surcharge on companies with a net earnings over $1 million. The plan could potentially raise billions for the state’s social services programs.

“It is unconscionable to force working families to pay the price for tax breaks and loopholes benefiting corporations and wealthy individuals,” Ting said in a statement, according to The San Francisco Chronicle. “This bill will help blunt the impact of the federal tax plan on everyday Californians by protecting funding for education, affordable health care and other core priorities.” [ Source: Fox News (Read More…) ]