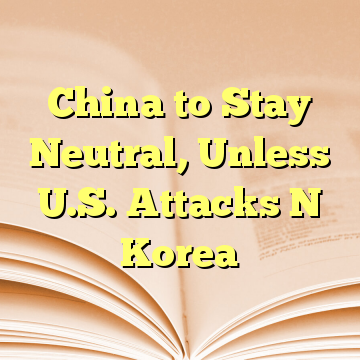 (Worthy News) – If North Korea launches an attack that threatens the United States then China should stay neutral, but if the United States attacks first and tries to overthrow North Korea’s government China will stop them, a Chinese state-run newspaper said on Friday.

President Donald Trump ratcheted up his rhetoric toward North Korea and its leader on Thursday, warning Pyongyang against attacking Guam or U.S. allies after it disclosed plans to fire missiles over Japan to land near the U.S. Pacific territory.

China, North Korea’s most important ally and trading partner, has reiterated calls for calm during the current crisis. It has expressed frustration with both Pyongyang’s repeated nuclear and missile tests and with behavior from South Korea and the United States that it sees as escalating tensions. [ Source (Read More…) ]