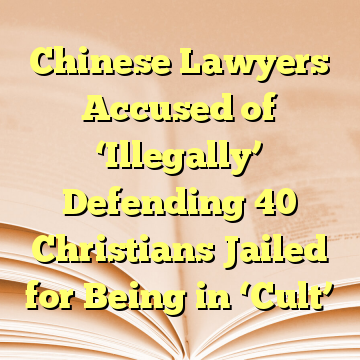 (Worthy News) – Lawyers who represent dozens of Christians arrested in China could lose their legal certifications after they were accused of illegally defending their clients.

The Chinese Christian persecution watchdog group China Aid reported over the weekend that attorneys who represent 40 Christians arrested during a crackdown on so-called “cult” activities over the last year have been informed that their qualifications will come under the review of officials in China’s Yunnan province.

According to China Aid, over 200 people were arrested across Yunnan province for their alleged involvement in the religious organization Three Grades of Servants. [ Source: Christian Post (Read More…) ]