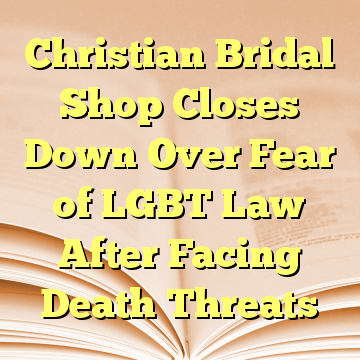 (Worthy News) – A Christian bridal shop in Pennsylvania that has faced death threats will shut its doors permanently due to the strong likelihood that a local town council will pass a law banning discrimination on the basis of sexual orientation.

W.W. Bridal in Bloomsburg, Pennsylvania, which made headlines in 2014 and again in 2017 because of the Christian owners’ refusal to sell wedding dresses to same-sex couples, has announced that it will close down officially on March 30.

Co-owner Lisa Boucher, who owns the store along with her mother and two sisters, told The Christian Post on Monday that there are multiple reasons for the family’s decision to close the shop. [ Source: Christian Post (Read More…) ]