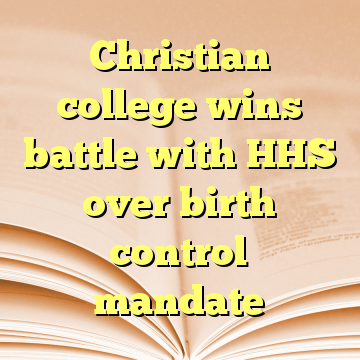 (Worthy News) – A district court ruled that the federal government can’t force a small Christian college to provide reproductive services such as the morning-after pill in its healthcare plans because it violates the college’s religious beliefs.

The ruling late Thursday caps a five-year battle between the Illinois-based Wheaton College and the Department of Health and Human Services over Obamacare’s birth control mandate. The ruling comes as President Trump’s efforts to scale back the mandate have been challenged in court.

George W. Bush appointee Judge Robert M. Dow Jr. of the United States District Court for the Northern District of Illinois issued the ruling. It protects Wheaton from any future application of HHS’ mandate, according to a statement from the nonprofit law firm Becket, which typically focuses on religious liberty cases and represented Wheaton. [ Source (Read More…) ]