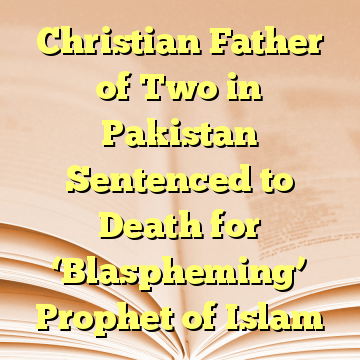 (Worthy News) – A Christian father of two in Pakistan has been sentenced to death for blaspheming Islam’s prophet in a phone text even though he is illiterate, sources said.

Nadeem James, 27, was charged in July 2016 in Gujrat District after a friend, Yasir Bashir, complained to police that he received a poem via WhatsApp instant messaging that was derogatory towards Muhammad and other revered Islamic figures. James’ attorney, Riaz Anjum, told Morning Star News that the court sentenced James to death on Thursday (Sept. 14).

“The trial was held inside the prison due to security reasons,” Anjum said, adding that they will challenge the conviction in the high court. [ Source: Morning Star News (Read More…) ]