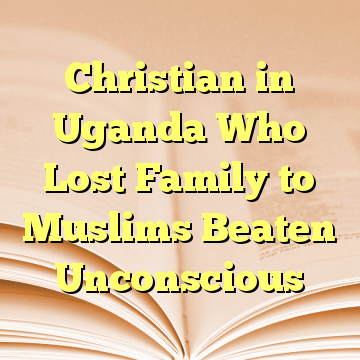 (Worthy News) – A former sheikh (Islamic teacher) in eastern Uganda has been in hiding since he lost his family for putting his faith in Christ two years ago, but last month he was tricked into a life-threatening encounter.

Mulangira Ibrahim, 27, was on his way to his pastor’s house after a church service on Lake Victoria’s Jaguzi Island, in Mayuge District, the evening of Nov. 16 when he received a telephone call from an unknown person saying the pastor wanted to see him back at the church compound.

Without a second thought, Ibrahim turned around.

“On my way to the church premise, four people stopped me and then got hold of me and started threatening me that if I do not recant Christianity and return to Islam, then they were going to kill me,” Ibrahim told Morning Star News. “I did not answer them, and one began slapping me, while another hit me with a blunt object. As I started screaming for help, I received more blows and from there I lost my consciousness.” [ Source: Morningstar News (Read More…) ]