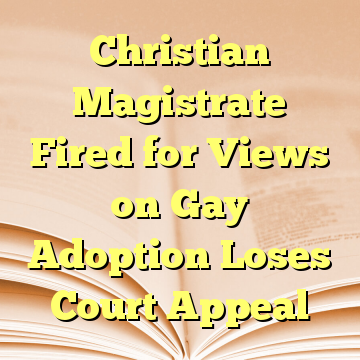 (Worthy News) – A Christian magistrate who was fired from his job after he voiced belief that adopted children are better off with hetrosexual couples instead of same-sex couples has lost a court appeal against his former employer.

An employment tribunal in the United Kingdom has ruled that the Kent and Medway National Health Service Trust was justified for refusing to reinstate Richard Page, a 71-year-old non-executive director, after he was suspended for suggesting on national television that children do best when placed with a mom and dad rather than when they are adopted by a same-sex couple.

The U.K. Christian news outlet Premier reports that Page worked for the NHS for two decades but that all changed after the Kent and Medway NHS and Social Care Partnership Trust (KMPT) requested that the NHS Trust Development Authority suspend Page over comments made on BBC defending his views on parenting. [ Source: Christian Post (Read More…) ]