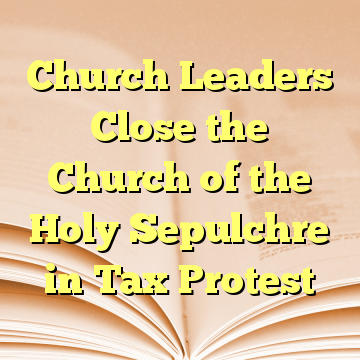 (Worthy News) – The leaders of the major Christian sects in Jerusalem closed the Church of the Holy Sepulchre, built on the traditional site of Jesus’ crucifixion and resurrection, for several hours on Sunday to protest an Israeli plan to tax their properties.

The Christian leaders responsible for the site issued a joint statement bemoaning what they called a “systematic campaign of abuse” against them, comparing it to anti-Jewish laws issued in Nazi Germany.

The Christians are angry about the Jerusalem municipality plans to tax their various assets around the city and a potential parliament bill to expropriate land sold by the Greek Orthodox and Roman Catholic churches. The churches, which are major landowners in the holy city, say it violates a long-standing status quo. [ Source: CBN News (Read More…) ]