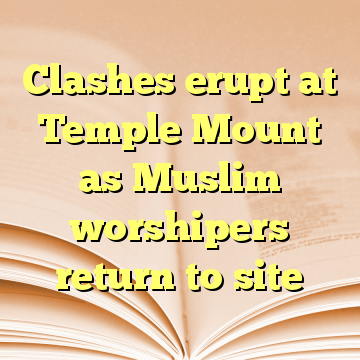 (Worthy News) – Thousands of Muslim worshipers entered the Temple Mount on Thursday for the first time in nearly two weeks, many shouting in delight as they did so, and violent clashes erupted between Palestinians and Israeli security forces at the compound.

A police officer was lightly injured after a rock was thrown at his head, police said.

Channel 2 reported that 10 police officers were injured in the ensuing clashes.

Some 115 Palestinians were treated for injuries both inside the compound and in the surrounding area, according to the Palestinian Red Crescent. A spokesperson said the injuries were mainly caused by rubber bullets, burns and bruises. Fifteen people were hospitalized, it said. [ Source (Read More…) ]