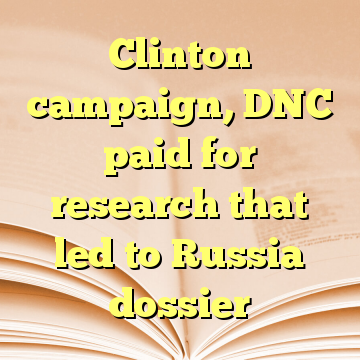 (Worthy News) – The Hillary Clinton campaign and the Democratic National Committee helped fund research that resulted in a now-famous dossier containing allegations about President Trump’s connections to Russia and possible coordination between his campaign and the Kremlin, people familiar with the matter said.

Marc E. Elias, a lawyer representing the Clinton campaign and the DNC, retained Fusion GPS, a Washington firm, to conduct the research.

After that, Fusion GPS hired dossier author Christopher Steele, a former British intelligence officer with ties to the FBI and the U.S. intelligence community, according to those people, who spoke on the condition of anonymity. [ Source: Washington Post (Read More…) ]