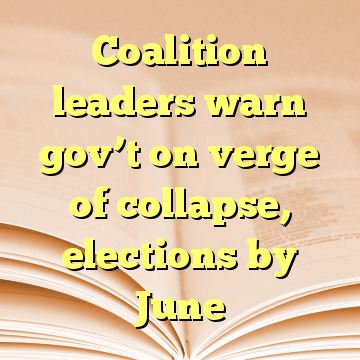 (Worthy News) – Senior coalition partners have reportedly warned that infighting over legislation exempting ultra-Orthodox students from military service will topple the government in the coming weeks, leading to new elections by mid-2018.

“Israel will be headed to the polls within the coming months,” Hadashot news reported Saturday, estimating the date to be June, nearly a year-and-a-half before the full tenure of Prime Minister Benjamin Netanyahu’s government is set to end.

The report said that while neither Netanyahu nor any of his coalition partners would like to see elections held early, none of them could withstand the negative publicity that a compromise over the decisive legislation could bring. [ Source: Times of Israel (Read More…) ]